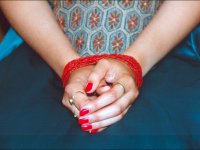 Worldwide, women continue to be denied the right to an independent life on the pretext of traditional, often out-dated concepts of honour. However, what are known as “honour killings” and forced marriages are only the most extreme forms of violence in the name of honour.

What is violence in the name of honour?

Violence in the name of honour, also known as honour crimes, is a type of violence used in order to safeguard or regain what is perceived as the family honour. Different expressions of this kind of violence range from emotional blackmail and psychological pressure to physical and sexual violence. Forced Marriages and honour killings also belong to this category.

What does honour or family honour mean?

Honour or family honour has different meanings in different cultures and countries. In strongly patriarchal societies, it is based on what is perceived to be 'correct' conduct for female family members who are regarded as men's property. If a female relative acts against the ruling norms, and if this becomes known to outsiders, then the entire family's honour is damaged, if not destroyed, and with it their social standing.

At the root of this lies the control over female sexuality. Sex is only tolerated within marriage. In some cases, a rumour or suspicion spread about a girl being seen with an unknown boy or man may be enough to damage the family honour. Rape can also lead to the loss of family honour.

It is the men's task to guard the family’s honour and therefore to control the female family members' conduct. Should they fail in this, the only option to regain the family's honour is to kill the girl or woman responsible for the loss of honour (killing in the name of honour = '‘honour killing'’).

What does honour based violence have to do with religion?

In several known cases of honour-based violence, the perpetrators have justified their actions with their religious beliefs. According to some religious beliefs, sexuality is only allowed within marriage. Extra-marital sex can damage family honour, which the men will try to mend using violence. However, any form of violence is an abuse of human rights and can never be legitimised.

What's the situation in Germany and Europe?

There is no doubt that honour crimes take place in Europe. In most cases, they affect girls and women from families with migrant backgrounds. On the one hand, these women experience a lot of pressure to conform to the patriarchal gender roles within the families. On the other hand, they want to live an equal and independent life.

There are no exact numbers on the extent of honour crimes in Europe. However, in 2008 the UK became the first country to publish a census on honour crimes (pdf-file). A survey by Dr. Khanum (pdf-file), for instance, shows that at least 3,000 young women in the UK are victims of forced marriage each year.

The first nationwide survey regarding cases of forced marriage in Germany was published in November 2011: On behalf of the Ministry for family, seniors, women and youth, a scientific survey by the Lawaetz Foundation was realised in cooperation with TERRE DES FEMMES and Torsten Schaak (office for socio-political counselling), which was accompanied by an advisory committee. Nationwide, 1445 helpdesks were interviewed on their experiences with cases of forced marriage. 830 of them replied and stated that there were all in all 3,443 cases of forced marriage in 2008 alone – 93% of them concerning women or girls. A close third of the affected people were underage, while 40% were between 18 and 21 years old.

Over the last three years, TERRE DES FEMMES has provided counselling and support to over 650 women and girls affected or threatened by forced marriage or honour violence. In every fifth case, a family relative issued death threats.

TERRE DES FEMMES successfully raises public awareness: Our campaigns ‘Stop Forced Marriage’ and ‘NO to violence in the name of honour’ have not only revealed the great extent of honour-based violence, but have also broken the taboo on the issue. Our work has demonstrated the urgent need for action on the subject and sent a wake-up call out to politicians. Meanwhile, an increasing number of federal states have introduced projects to protect against forced marriages. Legislative changes have been adopted, including a law which declares forced marriage a criminal offence in its own right, punishable with a prison sentence of up to five years (effective as of 1 July 2011). In order to support affected individuals effectively, specialised staffs from different authorities have undergone special training.

In 2015 the crime of forced marriage was also included in the so-called catalogue of offences committed abroad against domestic legal interests. If a forced marriage that takes place abroad involves a person having his/her domicile or usual residence in Germany it is subject to prosecution in Germany (Section 5 of the German Criminal Code).

In cooperation with the company 'Mensch: Theater' and the mobile advice centre 'Yasemin' TERRE DES FEMMES developed an interactive play called 'My life. My love. My honour' against honour crimes which premiered in July 2014. The play was performed at various schools in Baden-Wuerttemberg and will be extended by 10 more performances in 2015 and 2016.

Additionally, TERRE DES FEMMES has been advocating since 2015 for the worldwide abolishment of early marriages.

If you require more information or help, you can easily get in touch with a consultation centre and professional staff via our internet portal www.zwangsheirat.de